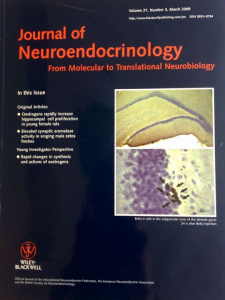 Liisa Galea has been studying how gonadal hormones affect the hippocampus since 1991.

Further, there is a sex difference in gonadal hormone regulation of adult hippocampal neurogenesis as androgens, but not estrogens, upregulate neurogenesis in the adult male (Spritzer & Galea, 2007; Hamson et al., 2013). Dwayne Hamson and I found that the ability of androgens to upregulate neurogenesis was dependent on the androgen receptor (AR) (Hamson et al., 2013). Dwayne Hampson showed, using both a pharmacological and genetic approach, that the AR was directly involved in promoting neurogenesis in the hippocampus (Hamson et al., 2013). We found that using testicular feminization mutation (TfM) rats (that have a non-functional AR) and flutamide, an AR antagonist, in wildtype rats, that DHT or Testosterone was unable to upregulate neurogenesis. Furthermore, we showed that there was no AR in the dentate gyrus which leads us to speculate that it is the AR in the CA3 region (the target region of these granule neurons) that promotes the survival of new neurons. Pilot work indicates that androgens increase neurogenesis in aged females but not young adult females. We work with Dr. Ashley Monks (University of Toronto) in both wild-type mice and mice that overexpress AR to explore how androgens upregulate survival of new neurons in the dentate gyrus (Ashlyn Swift-Gallant and Dwayne Hamson are working on this project).