The effects of estradiol (E) on learning and memory are complicated as past literature is equivocal. However, her research has addressed a number of inconsistencies in the field. These inconsistencies result from the fact that studies investigating the effects of E on cognition have used:

We show that all of these factors can influence E’s effects on learning and memory. My NSERC research has systematically investigated the effects of E on learning by:

In addition, we found that high ovarian steroids are associated with spatial strategy use (Rummel et al.,2013). Further, our work suggests both genomic and non-genomic mechanisms are at play for E to affect mesolimbic-dependent decision making and hippocampus-dependent memory (Barha et al., 2010; Sinopoli et al., 2006; Uban et al., 2012; Wide et al., 2004). To examine neural correlates of E’s effects on learning we found that E upregulated the synaptic protein, synaptophysin in the CA3, but not CA1 or dentate gyrus (DG), region of the hippocampus (Barha et al., 2010) and expression of the immediate early gene (IEG) product, zif268, in the ventral, but not dorsal, DG (Rummel et al., 2013) with water maze training. Furthermore, pilot data indicate that females and males show different expression patterns of IEG in the hippocampus and dorsomedial (DM) striatum (zif268/cfos) dependent on strategy use (Yagi et al., 2015).

Our research has also tried to link spatial learning to neurogenesis in both males and females. We have found that although males show an upregulation in neurogenesis in the hippocampus in response to spatial performance (Morris Water Maze or Pattern Separation), females do not (Chow et al.,2013; Yagi et al., 2015). This upregulation in neurogenesis with spatial learning in males is dependent on the type of task, the timing of the task relative to the maturation of new neurons, the strain of rat, and task difficulty (Epp et al., 2007, 2010, 2011a, 2011b; reviewed in Epp et al., 2013). 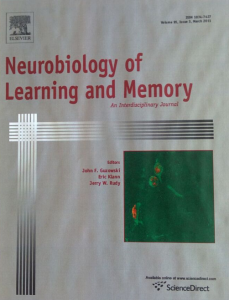